Roger Corman will do anything for a gold doubloon

There’s only one thing Roger Corman enjoys more than a cameo in one of his own productions, and that’s saving a buck. In the wonderfully (woefully?) titled ‘Sharktopus’ Corman gets to do both. Walking along a beach, exposing his old-man chest, Corman watches on as a blonde filly gets dragged into the brine by some awful CGI. Less bothered about the young lady’s fate, Corman turns his attention to a shiny coin that the ill-fated blonde had previously dug out of the sand. Why save a life when you can save a dollar? That’s how you get to be a movie producer. Watch the clip below taken for the Corman produced ‘Sharktopus‘, complete with director and producer commentary.

It’s always good news when a press release arrives in your inbox about a new Roger Corman film. It may well be battling Asylum in the stupid name category, but with Corman and Anchor Bay behind it, ‘Dinoshark‘ looks like it could be made from sounder monster bones. Check out the DVD artwork below and hit ‘more’ to read the press release. ‘Dinoshark‘ is released on DVD and Blu-Ray on April 26th.

END_OF_DOCUMENT_TOKEN_TO_BE_REPLACED

Who Is Walter Paisley?

Deadly Movies icon Dick Miller is a legend of b-movies and horror movies alike, making numerous appearances in any and every capacity from lead to sidekick, from support to cameo. Like many actors Miller’s career took off when he was spotted by b-movie supremo Roger Corman. In 1959 Corman would cast Miller in one of his mst memorable roles, that of Walter Paisley in ‘A Bucket of Blood‘. Miller’s darkly comic turn as Paisley saw him encasing his victims in plaster and passing them off as great lifelike works of art. In one of those wonderful movie eccentricities Miller would reprise Walter Paisley in five other movies between 1976 and 1994, each time in an entirely different scenario, from bookshop owner to diner owner and from janitor to cop. 1976’s ‘Hollywood Boulevard‘ would begin the trend of the reappearing Walter Paisley, a trend that really kicked in in the 80s with appearances in ‘The Howling‘ (1981), ‘Twilight Zone The Movie‘ (1983) and ‘Chopping Mall‘ (1986). Eight years later Miller would reprise Paisley for the last time (to date) in the TV movie ‘Shake, Rattle, and Rock!‘. A great bit of movie trivia that you only get in our beloved genre movies. 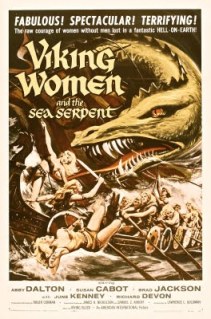 Isn’t this one of the most beautiful film titles you’ve ever heard? Doesn’t it just role off the tongue? This bonkers Corman produced and directed effort is basically a waring tribes deal with a puppet inserted for funzo. Alas I’m afraid I can’t really sex this up any better than the cheesy voiceover dude who offers these insightful, if incredibly misleading, words of optimism: ‘See the dance of desire, prelude to orgiastic revelries that only ancient civilisations knew (a little history lesson for you there)…, but one of the viking women has the evil serpent of jealousy in her heart (nasty condition that)…, see the fires of hate flare into the consuming flames of Hades‘ (ooh did you spot the switch in Nordic to Greek? Nice), and so on and so forth. Not really rememberable for anything other than the scantily clad ladies (including the pretty hot Abby Dalton) and the worlds least scary sock puppet attacking tribes folk. If nothing else you’ve just learned the word orgiastic (to resemble an orgy).
So step forward, is there anyone out there who can possibly remember this little gem?
Note: Yes that is the movie’s original real name that featured in the original release and trailor. However it was shortened on subsequent releases and on TV as Viking Women and the Serpent