Captain America and The Raiders of the Lost Adventure Movie 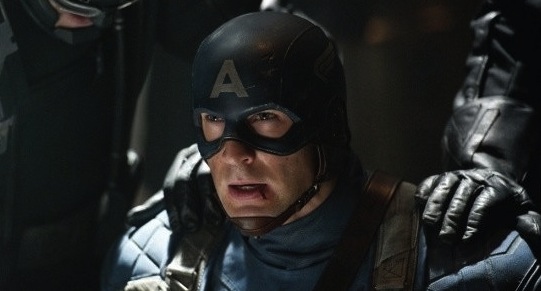 It’s taken Marvel a long time to finally play one of their trump cards in Captain America, the man who is arguably their figurehead, their front-man, their DC’s Superman. His appearance on-screen now is a carefully planned event, here to really ramp-up the road to 2012s all-star Avengers movie. But marketing and scheduling aside, he’s also a hard sell. For one he seems a little old-fashioned for contemporary cinema, a product of American WW2 propaganda who’s patriotic name, outfit, and shield seem a little cheesy when compared to the rough and ready heros that thrive at today’s box-office. Then you have the undeniably sticky political headache for the studio of producing something so irrevocably pro-American in a decade where Americas foreign policy is making more enemies  than friends abroad.

So It’s in the face of this filmmaking adversity that Marvel made a decision of some genius, making a call to director Joe Johnston who finally delivers a movie which his career has always threatened but never quite produced. Johnston is heavily influenced by mentors and chums George Lucas and Steven Spielberg, just look at his resume; ‘Honey I Shrunk the Kids‘, ‘Young Indiana Jones‘, ‘Jumanji‘, ‘Jurassic Part III‘.., If ever there was a love letter to your influencers this is it. Johnston clearly strives to make movies from the heyday of the Lucas and Spielberg family adventure movie, cornerstones of pop-culture like ‘Star Wars‘, ‘Indiana Jones‘, ‘E.T‘, and ‘Jurassic Park‘. With Captain America Johnston gets the leading man and period setting that his career has craved but lacked. Now he has his very own Spielberg movie, a movie the like of which Spielberg doesn’t really make anymore.

‘Captain America‘ is swashbuckling World War 2 adventure movie In the mold of ‘Indiana Jones and The Raiders of the Lost Ark‘ with Chris Evan’s Cap and team chasing an evil Nazi military science unit, headed up by Hugo Weaving’s evil Red Skull, across Europe. It’s probably the single most enjoyable Marvel movie to date (by the self titles studio or by anyone else). Where so many filmmakers crave the success and tone of Nolan’s Batman movies, Johnston delivers the flip-side of the coin; pure action-packed fun that never loses sight of its modus operandi. The period setting helps no-end, Johnston delivers a richly textured version of 1940s New York and war-torn Europe (Manchester in the UK standing in for both with remarkable effect). The costumes, sets, hair and make-up, and waepons are all expertly interwoven with more sci-fi elements to create something wonderfully comic-book, without falling into the pitfalls of comic movie stupidity. Johnston address the origins and development of Cap’s costume wonderfully (a costume which should be ridiculous in WW2) and even includes a 1940s Hollywood musical montage which works fantastically well to move the story forward and maintain the tone. At times (with the exception of all the CGI) this almost feels like an old-movie. There is still a lot of special effects here, but unlike many a Marvel movie, CG isn’t used to drive the plot. Particular praise go to the effects used to make pre-Cap-transformation Chris Evans look small and weedy.., which are incredible, only creaking in one scene where he looks less like a smaller, skinny man and more like a waxed hobbit.

When it comes to the possibly sticky situation of overtly celebrating Americanism Johnston expertly steers clear to admirable effect. Cap’s misfit crew of soldiers include an Englishman and (gasp) a Frenchman (yes a freedom fries munching surrender monkey), the love interest Peggy is a British agent, the movie largely takes place in London and mainland Europe, and features end of wartime celebrations not with a New York ticker-tape parade but with Union Jacks waving In Trafalgar Square. Of course he is an American hero, but what could have been a patriotic puke-fest is surprising well balanced and almost (almost!) conservative.

The cast are all spot-on. Chris Evan plays Cap with just the right balance of naivety, charm, and strength and Weaving is a delightful villain, channeling Nazi bad guys from war movies of old. In the supporting roles Tommy Lee Jones does his sarcastic gruff thing, Hayley Atwell looks for all the world like a Hollywood starlet as Peggy Carter, and Stanley Tucci and Toby Jones are solid choices in their respective scientist roles. The film doesn’t have an emotional core of something like ‘The Dark Knight‘ (but it doesn’t really need one), Hugo Waeving’s Red Skull is, in the end, lacking enough screen time to really threaten, there’s probably one-to-many supporting characters fighting for our attention, and the inevitable Marvel epilogue (in readiness for The Avengers) is fan pleasing but feels too quick and a little out of place. But these are pretty small quibbles in what is a hugely enjoyable adventure movie which breathes fresh air into Marvel which in previous years has (despite huge grosses) relied on paint-by-number plots and over reliance on weak CGI finales. ‘Captain America‘ is a film which other franchises should look to as an alternative approach to the genre.